Christine Ling is the Founder and Director of Music Land School of Music, which have multiple campuses in the Northern California and Southern California. Christine received her Master of Music and Bachelor of Music in Piano Performance from the San Francisco Conservatory of Music with first honor.

Christine has performed around the United Sates and numerous major venues in China as a soloist and in chamber, including but not limiting showing her performance appearance at the Carnegie Hall in New York etc. She has over 20 years of teaching experience in music and piano. Many of her students have completed the World’s leading music exam - Associated Board of the Royal Schools of Music exam (ABRSM) and won awards in various competitions. Not only making her appearance at various music venues, Christine has also been actively organized various concerts and recitals for the students frequently. She also has often cooperated with local city and community organizations for various concerts and events.

Christine has written and developed a set of special curriculum for young children to star learning the music foundation through a fun and engaging class which is a unique and successful program in the music industry. On top of working with a team of professional teachers with various instruments, Christine has developed the Music Land Youth Chamber Orchestra and Youth Rock Band, which created a platform for the students to make music with others, to be able to discover the joy of making music further. 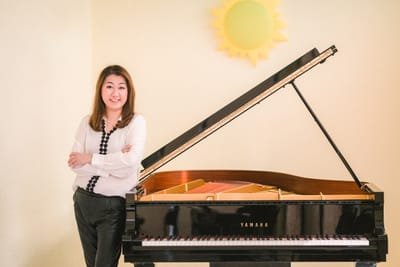